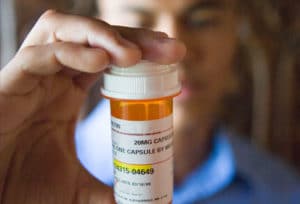 Benzodiazepines are a type of medication known as tranquilizers. Familiar names include Valium and Xanax. They are some of the most commonly prescribed medications in the United States. When people without prescriptions obtain and take these drugs for their sedating effects, use turns into abuse.
Doctors may prescribe a benzodiazepine for the following legitimate medical conditions:

Benzodiazepines act on the central nervous system, produce sedation and muscle relaxation, and lower anxiety levels.
Although more than 2,000 different benzodiazepines have been produced, only about 15 are currently FDA-approved in the United States. They are usually classified by how long their effects last.

Benzodiazepines are commonly abused. This abuse is partially related to the toxic effects that they produce and also to their widespread availability. They can be chronically abused or, as seen more commonly in hospital emergency departments, intentionally or accidentally taken in overdose. Death and serious illness rarely result from benzodiazepine abuse alone; however, they are frequently taken with either alcohol or other medications. The combination of benzodiazepines and alcohol can be dangerous — and even lethal.
Benzodiazepines have also been used as a “date rape” drug because they can markedly impair and even abolish functions that normally allow a person to resist or even want to resist sexual aggression or assault. In recent years, the detection and conviction of people involved in this has increased dramatically. The drug is usually added to alcohol-containing drinks or even soft drinks in powder or liquid forms and can be hard to taste.

Although some people may have a genetic tendency to become addicted to drugs, there is little doubt that environmental factors also play a significant role. Some of the more common environmental influences are low socioeconomic status, unemployment, and peer pressure.

At normal or regular doses, benzodiazepines relieve anxiety and insomnia. They are usually well tolerated. Sometimes, people taking benzodiazepines may feel drowsy or dizzy. This side effect can be more pronounced with increased doses.
High doses of benzodiazepines can produce more serious side effects. Signs and symptoms of acute toxicity or overdose may include the following:

Signs of chronic drug abuse can be very nonspecific and include changes in appearance and behavior that affect relationships and work performance. Warning signs in children include abrupt changes in mood or deterioration of school performance. Chronic abuse of benzodiazepines can lead to the following symptoms that mimic many of the indications for using them in the first place:

Despite their many helpful uses, benzodiazepines can lead to physical and psychological dependence. Dependence can result in withdrawal symptoms and even seizures when they are stopped abruptly. Dependence and withdrawal occur in only a very small percentage of people taking normal doses for short periods. The symptoms of withdrawal can be difficult to distinguish from anxiety. Symptoms usually develop at 3-4 days from last use, although they can appear earlier with shorter-acting varieties.