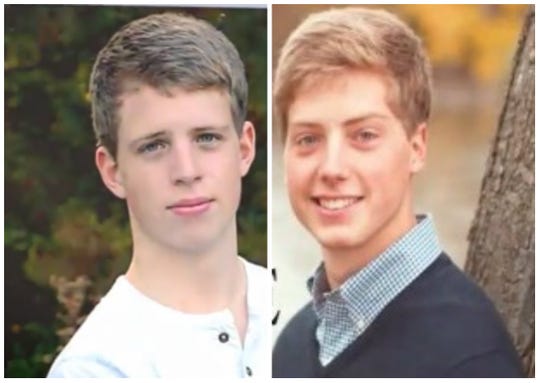 There were chores to do that Sunday morning and Becky Savage had started them. She was plucking up pieces of clothes strewn about the house — a house full of four boys — to load a heap of laundry into the washing machine.

Jack kept sleeping, the way 18-year-old boys will do. Becky looked at him lying there in bed so peacefully. She doesn’t remember much about that morning, so much of it is a blur, but she recalls this clearly.

“I remember looking at Jack and thinking, ‘He’s just such a beautiful kid. He looks like an angel sleeping,'” Becky said. “Little did I know what the prophecy of that thought would hold for me that day.”

Saturday had been busy. Jack and his older brother, Nick, 19, had gone that morning to the job they shared moving furniture for a motor home manufacturer.

After their shift, the two standout hockey players — Nick, the quiet rule follower and Jack, the silly one who always had a smile on his face —  got haircuts. They had a big night ahead, lots of graduation parties to attend.

At home, freshly showered and dressed, they joined their mom to attend a few of those parties together. Their dad, Mike, had taken the two younger boys, Justin and Matthew, to the family’s lake house to fish.

Later that night, Becky hugged her two oldest boys as they headed to another party. “Be home at a reasonable hour,” she told them. Becky didn’t go. She had grocery shopping to do, then she went home to wait up for her sons.

Just like clock work, Nick and Jack sauntered in that night on time as they always did, a little after midnight. They checked in with their mom.

“I made eye contact with them,” Becky said. “We had a 2-story foyer and I remember them coming in and I was looking at them and they headed into the kitchen to make a snack.”

Becky turned her light off and went to bed. Their late night snack finished, Jack went to his room and Nick, along with a few friends, headed to the basement.

Chills through her body

The more Becky looked at Jack that next morning, the more her concern grew. This wasn’t the typical scenario of not being able to get a teenager up.

She walked to his bed and nudged him, then tugged at him. Nothing.

Becky screamed for Nick to come upstairs from the basement. “I need your help! Nick! Help!” She ran to grab her cell phone and called 911, then rushed back to get Jack out of bed. She laid him on the floor and started CPR.

While tending to Jack, she was still screaming for Nick. He was the oldest, the calm, collected one, even at 19. She needed him.

Paramedics rushed into Jack’s room and then one of them, just as quickly, left.

“Where are you going? Why are you leaving him?” Becky yelled as he rushed out of the room. “He’s a fighter. What are you doing?”

The next thing that happened is one of those bits and pieces Becky remembers from that terrible morning. It sent chills through her.

The paramedic who’d left Jack’s room returned. “We need a coroner,” he said.

He hadn’t even been near Jack.

Becky had no idea, but at the same time she was calling 911 for Jack, those friends down in the basement had found Nick, just as Becky had found Jack — unresponsive.

Becky didn’t even make a move for the basement when she realized what was going on. Her world was crashing in on her. Two of her boys not waking up? She didn’t want to see Nick like she was seeing Jack.

“I wanted to remember him the way I saw him the day before, the smile,” she said. “And he gave me a hug before they left to go to the graduation party.”

Just as the horror set in, her mind switched gears. What had happened in her house? Was there a gas leak? She couldn’t stop screaming. What happened?

One of her sons’ friends turned to Becky: “They experimented last night… with oxy.”

Oxycodone. Becky was a nurse. She needed someone to give them Narcan, a medication designed to reverse the effects of opioid overdose. She started asking the first responders if they had any.

They just looked at her. It was too late for Narcan.

Nick and Jack Savage were pronounced dead inside their home on June 14, 2015.

It’s been four long years and Becky still thinks about it every single day. Someone showed up to that graduation party with a bottle of prescription pills in their pocket. Becky doesn’t want to know the details of who had them or what transpired that night.

“I haven’t asked,” she said. “Nothing will ever change the outcome of that night and I can’t beat myself up over details of wanting to know. I have to focus on things I can change.”

She does know that Nick and Jack drank alcohol that night, which she believes impaired their decision-making and prompted them to try the pills.

The Savage family story struck a nerve in the community. Parents were terrified. If this could happen to Nick and Jack — star athletes with good grades who went to church and volunteered — it could happen to any of their kids.

Some people have asked Becky how she has managed to not point fingers or place blame.

Mike and Becky had talked to their boys about everything, all the stuff that they thought they were supposed to talk to their kids about — drinking, drinking and driving, illicit drugs, sex.

“But prescription drugs were not even on our radar,” she said. “Four years ago we had no idea that kids were even doing that.”

Now, it’s the Savages’ mission to make sure teens and parents know what they did not.

So no one has to live the nightmare they did — losing two beautiful boys on the same day.