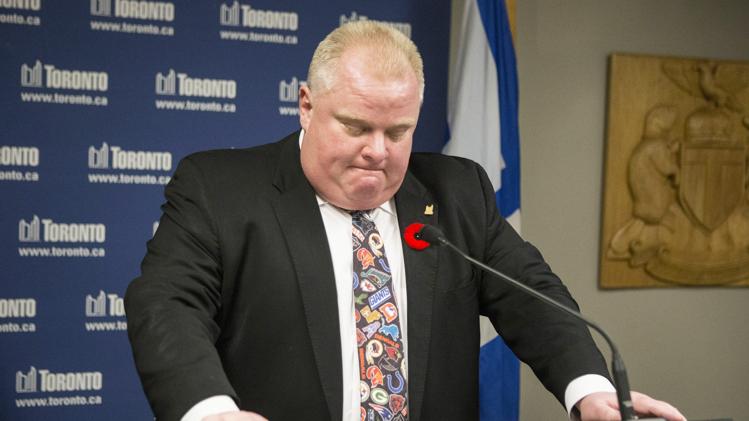 Protesters left colorful chalk messages on walls and pavement outside Toronto City Hall on Wednesday urging Mayor Rob Ford to quit after his bombshell admission on Tuesday that he has smoked crack cocaine.

“I’m a taxpayer, and I would like you to resign – now,” read one message targeted at the right-leaning mayor, who speaks often about saving taxpayers’ money. Another said: “This wall would be a better mayor.”

But Ford’s chalk-wielding opponents may have a long wait. The mayor, who made his admission after months of dodging questions about reports that he had been caught on video smoking crack, has said he will not resign and plans to run again in next October’s mayoral election.

“Rob Ford is a liar,” is how the Globe and Mail, Canada’s staid national paper, opened its editorial on Wednesday. And later: “A more honorable man would do the right thing. He’d resign. Rob Ford has shown time and again that he’s not that guy.”

A bloc of angry city councilors is now set to try to pass motions to curb Ford’s already limited powers as a Toronto mayor, but it is very difficult to remove a sitting mayor.

One of Ford’s policy aides quit on Tuesday and Deputy Mayor Norm Kelly said he has suggested that Ford step down temporarily.

But Ford insists he has nothing left to hide, and over his years as a bombastic city councilor and now as a polarizing mayor, he has proven resistant to both public criticism and private advice.

The story of the crack video, the existence of which was first reported in May by media blog Gawker and then by the Toronto Star newspaper, has never been exclusively about whether Ford has used illegal drugs.

It has also raised questions about Ford’s ties to alleged drug traffickers, and pitted him and his brother, also a member of Toronto city council, against the city’s chief of police, who said last week the force had obtained a video “consistent” with the Gawker and Star accounts.

Ford’s personal life started making headlines before he was elected mayor in 2010. But the Gawker and Star reports in May that they had seen a video that appeared to show Ford smoking crack transfixed Canada’s largest city. The simmering crisis hit full boil after Police Bill Blair confirmed the video’s existence on Thursday.

Toronto police said on Tuesday that the mayor’s comments admitting that he had smoked crack had been forwarded to investigators.

The case has brought back memories of Washington D.C. mayor Marion Barry, who was caught on camera smoking crack, jailed, and then released, after which he was re-elected.

Police documents released last week showed that Ford had been under surveillance for months as part of an investigation into the media reports about the video and other matters. More documents are expected soon, thanks to a series of court challenges by local media outlets.

Then there is the photo of Ford published with Gawker’s original post, which showed him with three young men. One of the men was shot and killed on March 28, and a second was injured in the same incident. Their attacker pleaded guilty to manslaughter and aggravated assault in June.

The injured man was later arrested as part of a gang crackdown called Project Traveler, according to police documents. He was charged with trafficking cocaine and marijuana. The case has not yet been heard in court.

Toronto police have said Project Traveler uncovered criminal activity that fell outside that investigation’s mandate, so the force launched a separate investigation, Project Brazen Two, led by a top city detective. That initiative lead to the extortion charge against Lisi.

A draft council motion may strip Ford of the power to appoint the deputy mayor and committee chairs, but council does not have the power to vote Ford out of his job over the crack allegations, and Toronto has no recall procedure of the sort that has become common in the United States.

Ford would become ineligible for office if he was convicted of a crime and jailed, said John Mascarin, a lawyer and municipal law expert at Aird & Berlis LLP. And he could be removed if he violated election or conflict of interest rules, or missed more than three consecutive council meetings.

The province of Ontario could pass a law to make it possible to remove Ford, but Ontario Premier Kathleen Wynne has given no indication she is considering this.

“My view is that the province will not ever do that in this case,” Mascarin said. “It would be an unwarranted intrusion into municipal jurisdiction.”

Ford has a hard core of support, especially in suburban districts where city services are meager and incomes lower than they are downtown. One woman interviewed by local news network CP24 after Tuesday’s revelations called the mayor “delightfully human”.

He takes pride in dealing with constituents one-on-one, publishing his phone number and sometimes visiting those who complain at their homes, with city bureaucrats in tow, and that has won him staunch fans. But he has struggled to maintain the support of council, which has final say over most city business.

A Forum Research poll, taken after Blair confirmed the existence of the video, put Ford’s approval rating at 44 percent, up five points from a previous poll, although 60 percent said he should resign.

Another recent Forum poll showed Ford losing next October’s mayoral election in a number of hypothetical races. The poll said he would lose against right-of-center Councilor Karen Stintz – who plans to run. It said he would also lose to Olivia Chow, a federal member of Parliament for the left-leaning New Democratic Party who said in July she is considering a run.

As part of his tough-on-crime agenda, Ford has railed loudly against gang violence and against drug users and decriminalization of drugs.

“Might as well give them a gun. Might as well let them shoot themselves. What are they going to do to our families?” he said in a video clip that circulated on Twitter on Tuesday.