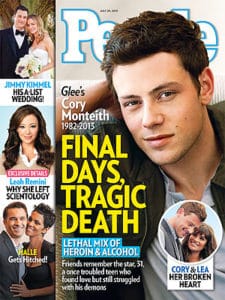 He played a smooth-singing, sweet-talking jock on TV, but in real life Cory Monteith was fond of describing himself with one word: awkward.

Even after the gangly, 6’3″ star rocketed to stardom on the FOX smash Glee, he still “thought of himself that way,” says Maureen Webb, an early mentor who discovered Monteith when he was a 20-year-old self-described “wayward youth.”

Dining with Webb and his manager Elena Kirschner at Vancouver eatery East of Main on July 11, Monteith – who had completed rehab for substance abuse two months earlier – “was in great spirits,” says Webb.

When the subject turned to his work with Project Limelight Society, a nonprofit arts program for kids, “his face lit up,” says Webb, who cofounded the group. Having overcome his own tough childhood, “he said, ‘The performing arts saved my life once. I want to give back.'”