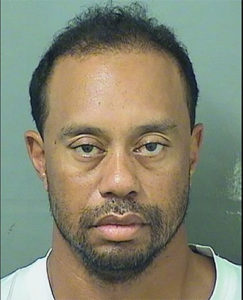 Tiger Woods told police after his DUI charge that he has prescriptions for 4 drugs — here’s what they do
Police arrested and charged Tiger Woods was with DUI at 3 a.m. on Monday morning, citing “an unexpected reaction to prescribed medications.” The police report indicated that Woods was found asleep in his car while it was running. An alcohol breathalyzer test showed Woods had a blood alcohol level of 0.00, but his arrest report indicates he was taking four prescription medications at various points in the past few years, most of which are typically prescribed for pain.
The officers recorded (and likely misspelled) these as “soloxex,” “torix,” “viox,” and Vicodin, according to The Palm Beach Post.
Vicodin, the brand name for a painkiller that combines the opiate hydrocodone with the over-the-counter pain reliever acetaminophen (or Tylenol), is a Schedule II substance due to its high potential for addiction. Its side effects can include confusion, depressed breathing, and drowsiness.
Torix, which is most likely a misspelling of Turox, is a brand name for another pain- and swelling-relief drug called etoricoxib. The drug is illegal in the US; its side effects can include fatigue and chest pain.
Vioxx, a brand name drug that Woods indicated he had not taken within the past year, was discontinued in 2004 after being linked to heart issues. It was used to reduce swelling.
Over the course of his career, Woods likely struggled with pain. He not only injured his knees, legs, and back playing golf, but also underwent multiple surgeries for those injuries and crashed a car. While we don’t know how he or his physicians chose to manage his pain, we do know that prescriptions for pain medications, including opioid painkillers, are common in such situations. According to the Centers for Disease Control and Prevention, more than a third of people who undergo surgery get an opioid prescription.
Woods’ non-opioid prescriptions also come with side effects —  while less severe than those that accompany Vicodin, the effects can include fatigue and confusion.