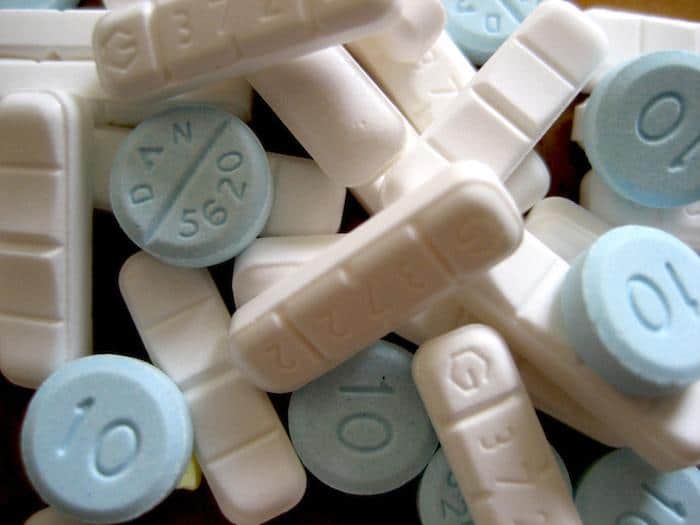 The first time I took Valium I was 19 and traveling through Southeast Asia with friends. I was going through my first major breakup and found myself waking up each night screaming. It was pretty dramatic. Someone handed me a Valium and I slept soundly for the first time in weeks.
Weirdly, my Valium addiction didn’t start on that holiday. It began when I started to suffer with fatigue in my first job after university. I wasn’t paid enough and was too broke to move out of my parents’ house. With the stress of living at home, bosses constantly breathing down my neck, and constant whispers of redundancies, I’d often get migraines. My hands would go numb as I typed. I was becoming incredibly anxious, my stressors manifesting in physical ways, but I didn’t really have the vocabulary or understanding of mental health conditions then. I just plowed through.
My partying got out of hand at this point—you can wind up craving powerful, out-of-mind experiences when you’re young and your day-to-day life has become so defined by work-related anxiety—and with it came Valium. My friends and I all bought it from friends-of-friends, and took it to soften the sharp edges of our comedowns. It was—is—like the world’s most luxurious blanket.
Even though I got to a point where I wouldn’t embark on a big night out without having the small blue pills on hand, I had absolutely no idea that I was becoming addicted to them.  One day, though, I took a Valium at work, which in hindsight was a pivotal moment. In such a short while, the fear and dread had totally evaporated. My headache was gone. I could cope with my overbearing boss and the hundreds of unread emails in my inbox. The constant, creeping feeling that I was going to have a panic attack went away and this is where the cycle truly began.
Of course, Valium and other anti-anxiety benzodiazepine drugs like Xanax aren’t just incredibly addictive—you build tolerance to them very quickly. I began taking half a Valium if I was on deadline, but my body soon craved more. It barely touched the sides. Soon, I was taking a 10 mg pill (the strongest dose manufactured) every morning. Within months I was taking 20 to 30 mg every day.
The trouble is, of course, that with increased tolerance to benzos comes decreased normality when you’re not taking them. I reached a point where, if I didn’t take Valium, I’d feel more panicky than when I first started using them as a crutch.  “Benzodiazepines like Valium that are used for managing anxiety actually make anxiety symptoms worse,” says Tim Leighton, the director of professional education and research at Action on Addiction. “It’s why they’re not recommended for long-term use.
“Doctors in this country do not prescribe benzodiazepine drugs for more than a few days at most,” he continues. “The drugs are just too addictive. Most people who get into trouble with these medications are older people who have had these drugs prescribed unwisely many years ago and been unable to get off them—or young people getting them online.” Young people like me. And he’s right—before long I was ordering my Valium online, with absolutely no idea of its provenance or purity. It could have been citric acid dyed blue for all I knew. But I—and anyone—could order 50 10 mg Valium tablets for $40 and they’d be with me just a few days later. I didn’t even have to meet a dealer face-to-face.
Having a constant stream of Valium in your blood begins to numbs you. I found myself doing questionable things with men I barely knew—I once abandoned my mate on holiday for a guy—without worrying about the consequences. And if I did start to question myself, I’d just take another pill.

The trouble with increased tolerance to benzos is decreased normality when you’re not taking them.

It all had to come to a head at some point and, oh fuck, did it. L ast Christmas, aged 26, I ordered a bunch of dud pills when I was on holiday from work and that’s where it all came crashing down. Within days I was convinced that I was totally and utterly losing my mind. I was free-falling through a range of physical and mental symptoms that, despite popping (fake) pill after fake pill, wouldn’t abate. From feeling constantly like I was about to have a panic attack, suffocating paranoia that everyone hated me, agoraphobia, migraines, constant dry retching, uncontrollable sobbing, hot and cold flushes, to heart palpitations—I felt like I was dying.
I obsessively googled my symptoms and, finally, stumbled on a thread that explained exactly what was happening to me. Some old guy in America had been prescribed Valium 20 years ago and was feeling completely insane since his GP cut his prescription. He had the exact same symptoms as me, and it all began to make sense. I was coming off an incredibly powerful drug that I’d become addicted to, cold turkey. My body was going through withdrawal.
“Valium can be even harder to come off than the more ‘spectacular’ drugs like heroin and cocaine,” says Leighton. “Withdrawal is entirely dependent on how much you’ve been taking and for how long, but it is potentially life-threatening. Withdrawal  from heroin is not actually life-threatening in itself, but the seizures that can occur with stopping Valium can kill.” As I look back, the thought that I could have had a seizure due to my own naivety makes my blood run cold.
The coming months were spent tapering off Valium slowly, thanks to the help of a wonderful, completely nonjudgmental doctor. But getting to the clinic was still the hardest thing I have ever done.  The symptoms I’d felt at Christmas came back, albeit less severely. I kept my job—just about—but once I’d finished work each day I could do nothing other than go home, lie on the couch, and let my brain do its thing. I was a paranoid, sweating, sniffling mess, and I felt like I always had the flu. It was a constant struggle to listen to anyone or walk anywhere. My sleep cycle was fucked and I conducted my life in a mist of excuses—friends constantly heard that I was “exhausted” or that a family member had become ill. One snapped, finally, saying, “You always flake on us,” which sent me into a bitter spiral of paranoia all over again. But who could blame her?

And yet, I told no one. Absolutely no one knew what I was going through. I was desperately ashamed of myself. “Secret addictions are not as uncommon as you’d think,” says Leighton. “You simply don’t realize that someone has an addiction because they’re managing to hide it.” Having the “gumption” to deal with addiction alone is, he says, “admirable,” but that it’s “highly preferable to have someone to confide in.”
And so I sat, secretly, in an NHS outpatients’ drug unit one morning per week. My specialist doctor assessed whether I could be trusted enough (I could, after all, hoof them all in one go and just buy more online if I wanted to) to be dispensed my one-week Valium prescription, tailored to taper me off slowly over a period of months. I stuck with the plan because I was determined not to go back—mostly because I didn’t feel I could do it, physically. My body was ravaged.
Getting to the clinic once a week wasn’t easy, though—I was terrified every time I walked through the doors. Everyone else there was coming off heroin and I was the stupid, middle-class girl of whom the other patients must have thought, Why the fuck is she in here? Fights often broke out in the meeting room and I was often shouted at in the street by men being treated there. But this is the bleak reality of addiction treatment—who can actually afford to go somewhere like The Priory?—and the NHS provided a kind, unfalteringly dependable service that I owe my life and sanity to.
It’s been a year now since I realized I was addicted to Valium and I can, for the first time, say that I am largely OK. Slowly, under medical supervision, I became a “normal” person again. I still get weird panic over silly things, as well as the odd tension head and backaches. But I feel largely myself again.
I had a propensity for anxiety before I started taking Valium, but I’d never experienced panic attacks or their suffocating spiral of negative thinking until I was in the full swing of my addiction. I’d take back the last 12 months in a heartbeat if I could because I feel like, now I’ve experienced the dark, bleak capacity for despair my mind is capable of, I might never be completely the same. I’ve felt, and thought, too much.
My only hope is that even if one person reading this who takes Valium recreationally thinks, Yeah, maybe I should lay off it a bit, at least something good can come of my experience. Valium—or any other benzo—is not a joke. It’s not a toy. It’s not a quick fix for any kind of life stress. It might soften the blow of the odd comedown, but trust me: The more you rely on it, the more powerful it becomes. It’s a drug no one can become bigger than.